Recently, a Korean company posted an advertisement on New York Times Square, which became a hot topic in the media 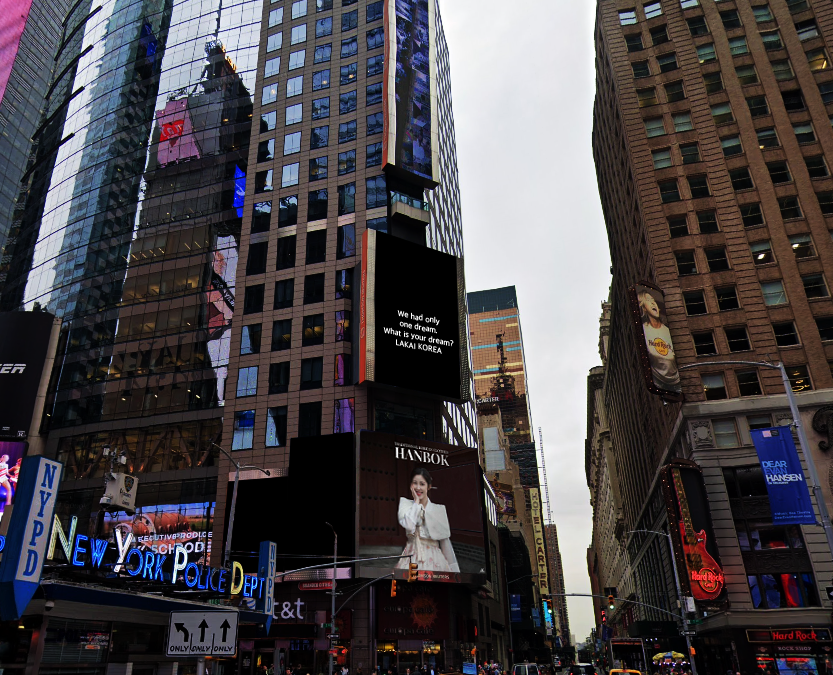 This woman is Korean idol singer Jun Hyoseong, and she is one of Korean celebrities who speaks confidently on the historical issues of her country, such as ‘Dokdo’, which is embroiled in a sovereignty dispute with Japan, and ‘comfort women’, Japanese military sexual slavery, and demonstrates what it is to properly exercise the social influence of public figures.

Lakai Korea, a fashion brand that has consistently tried to preserve the history of Korea, produced an advertisement based on Korean traditional clothes, Hanbok, in collaboration with Jun Hyoseong, who believes in the same path.

The background of this advertisement has to do with the issue of China’s Northeast Project, which is currently seeing international controversy.

China recently insisted that the traditional Korean food “Kimchi” is their ‘Pao cai’, a traditional Chinese food, and that the origin of the Korean traditional clothing “Hanbok”, with its tradition of over 1,600 years, originated in China. While the controversy over the Northeast Project, an attempt to claim the history of East Asia as their own, continues, this small Korean company and a singer took action to solve this using their respective positions.

Many who saw this advertisement were angry, saying, “It is clear that Hanbok is Korean and it is wrong to distort history like that.” In addition, many people are making requests for correction to various overseas sites where information is incorrect due to distorted history from China.

It is unusual to see brands that can advertise in New York Times Square, where people from all over the world can see. Even if advertising is conducted, it is common for fashion brands to advertise their products, or for artists to advertise their own music. However, Lakai Korea and Jeon Hyosung are the first in the world to appeal to people around the world with an advertisement to correct the distorted history of their home country.

In addition, they are speaking ahead of anyone in Korean society on a variety of historical issues, such as the issue of ‘comfort women’, Japanese military sexual slaves, and the forced labor of Korean workers, with which they are constantly struggling with Japan over historical distortion.

In this regard, many Koreans are supporting Lakai Korea because of its continuous actions and prioritization of the public interests of Korea over the interests of their own profit as a company. In addition, as the demand for Korean cultural contents and products containing traditional Korean images has increased, Lakai Korea is gaining attention in overseas markets. Lakai Korea’s own belief and sincerity are having a great influence around the world.

As one of the slogans that the Korean people shout out to protect their own history, there is a saying that “there is no future for a nation that has forgotten its history.” It also means that only people who remember history can continue into the future.

I look forward to the future of Korea, led by Lakai Korea and the Korean people, who remember history with such sincerity.